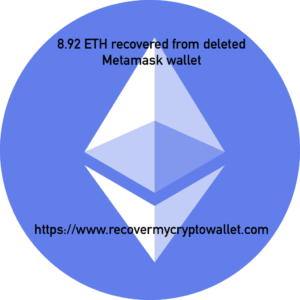 We’ve just recovered 8.92 ETH from a deleted Metamask wallet. Obviously the client is delighted as they believed the ETH had been lost forever.

The client was using Metamask on their Windows computer and had accidentally deleted their Metamask wallet. This meant that they lost access to everything the wallet contained. The client had recorded the seed words when they originally created the wallet but told us he was not able to recover his ETH when he entered them to recreate his wallet.

Fortunately the Metamask vault data still existed on the client’s hard drive. The client zipped up the contents of necessary directory and emailed it across to us. We were able to extract seed words of the client’s deleted Metamask wallet and compared them with what the client had recorded. This showed that the seed words were correct but had been written down in the wrong order by the client.

If you have a similar problem with a Metamask wallet please contact us for help.