Software (or ‘hot’) wallets are essentially Apps or programs that run on a mobile phone or computer and require an internet connection to work. As the cryptocurrency space grows so do the features of the wallets and many different types are available today

Obviously the methods used to recover the the wallet and it’s contents depending entirely on what the actual problem is.

We can reconstruct lost passwords and seed phrases. The chances of us successfully getting access to your wallet increase greatly if you can remember any of the details about the forgotten or lost password / seed phrases. Please contact us for further information. 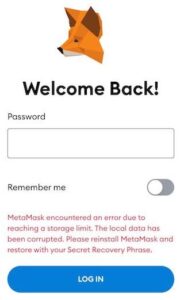 If your wallet or it’s contents become inaccessible due to what appears to be an App error it’s important that you try and screen shot everything about the transaction. Our advice would be not to reinstall the App either because if the problem still persists after a reinstall all the information we need to recover the transaction will have been wiped during the reinstall.

Lost and missing wallet transactions often involve DeFi Apps and are sometimes related to glitches or cross chain / App incompatibility. It’s important that you record as much as you can able the missing transaction and then contact us.

Transactions Sent to the Wrong Address

This is easily done and can often be reversed depending on the blockchains involved. Make a record of exactly what you’ve done and then contact us.

Sometimes there’s nothing wrong with your wallet. Instead it’s the hardware that runs your wallet that’s the problem. Maybe your phone is damaged and will no longer power on, or maybe your hard drive has started to make a ticking sound and is not longer showing up on your computer? Fortunately we are partnered with Data Clinic Ltd, the UK’s #1 data recovery company who specialise in recovering wallets from damaged hardware. We also have preferential rates with them. Please contact us for further details.

These early examples of software wallets were popular in the early days of Bitcoin but have since drifted into obscurity and are no longer supported. The first was MultiBit Classic that relied on a password only, this was replaced by MultiBit HD which also introduced a seed phrase. Many early adopters of Bitcoin used these wallets on their computer hard drives.

Popular in the infancy of Bitcoin, Multibit Classic and HD wallets were one of the most popular early Bitcoin wallet. The MultiBit program was downloaded to your computer and a wallet was created on it’s hard drive. Your Bitcoins were stored in this wallet. Because the price of Bitcoin was very low back then many people didn’t take that much care of their wallets. Passwords were forgotten, hard drives became faulty, or the whole computer became so old and slow that it was either thrown out or put in the loft and forgotten about. The team behind MultiBit stopped supporting it years ago too and successfully retrieving Bitcoins from old MultiBit wallets is virtually impossible without a specialist. Fortunately, we are able to recover Bitcoins from MultiBit wallets.