A Tale of Lost Bitcoins

Home » Tips & Tricks » A Tale of Lost Bitcoins
Previous Next

A Tale of Lost Bitcoins 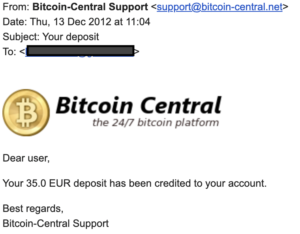 She’d found her old hard drive and asked us to check it to see if we could locate her Bitcoins, but unfortunately we couldn’t find any trace of a wallet file. We asked her if she still had her emails from 2012 which she did.

It turned out she used an exchange called bitcoin-central.net (you can find it on the Wayback Machine) who kept custody of her Bitcoins. Unfortunately a few months after she brought her Bitcoins the exchange was hacked and the site disappeared into oblivion along with her coins.

The only proof there was that she had any interaction with Bitcoin Central were several emails like this. As you can see, there are no transaction or purchase details to go on at all, just an acknowledgement of a credit to her account.

An exchange behaving like this today would be closed very quickly, but back in 2012 Bitcoin-cental.net was (for a while) seen as cutting edge, as it was one of the few internet sites where people could buy Bitcoins.