We recently had a recovery request from a customer with some Bitcoin stored on a Ledger Nano S crypto wallet. For whatever reason he’d lost the PIN code to log in to his Ledger device and had therefore re-initialised it with the purpose of re-entering his seed words to gain access to his old wallet. 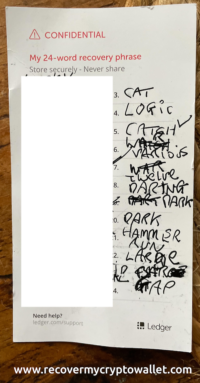 He contacted us because he was having trouble with the seed words he’d recorded – see the picture.

Additionally, the customer also had 3 sets of 24 recovery seed words and was unsure which set of seed words were the right ones.

The Ledger Nano S hardware wallet uses a BIP39 compatible word list, this means that for a 24 word seed there are 2048 different words that could be used in each of the 24 locations. This makes the odds of cracking a seed phrase successfully a 1 in 2048^24 chance if you don’t know any of the seed words. Those of you who are familiar with the BIP39 word list will notice that some of the words the customer has written on the recovery sheet (such as ‘war’ and ‘dark’) aren’t even in the BIP39 list. Where did these extra words come from ? Your guess is as good as ours.

We’ve made some educated guesses with this wallet and have already tried in excess of 100 billion (100,000,000,000) seed phrase combinations but as yet haven’t cracked this.

The moral of this tale is to make sure you record your seed words as accurately as possible and to avoid confusion later on, destroy any previous seed words that are no longer in use.