Here’s a sorry tale in the victim’s own words. I’ve commented at the bottom of the post 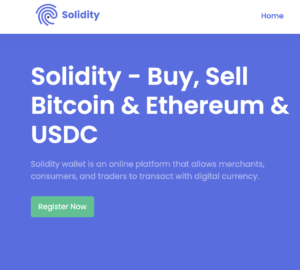 “I had 32 BTC deposited into the solidity wallet. The online company (Solidity – https://soliditywallet.net/) would not allow me to withdraw my money until I deposited (£25k) which i did and they removed my withdrawal restrictions after 7 days. Solidity then refused to allow me to make small withdrawals and said I had to withdraw all of my money which I did in accordance with the instructions online.

Due to a computer system error which Solidity refused to accept the money submitted for withdrawal was over the maximum and therefore did not take into account the 10% withdrawal fee. I then had to deposited more money into the wallet to cover the 10% fee (£55k) which I did. Once it was received Solidity stalled after they told me the withdrawal process would take 5 hours.

They asked for ID which I sent to them which showed that I am from the UK. Solidity then highlighted the 20% capital gain tax and then told me that I had to send them 20% of the 32 BTC. They basically implied that I had to sign a document allowing them to act as my tax agent as my tax has to be paid to HMRC. I informed them that I have an accountant and that I did not authorise them to act as my tax agent. I raised the point that all agents had to be registered on HMRC’s online system and would be allocated an tax agent number which Solidity had not provided to me. Solidity ignored my email and then all of a sudden they accused me of accessing my account from Germany Berlin, and then coincidentally my Solidity account was hacked.

They blocked me out of my Solidity account and during that time they allowed the hacker under the name ‘czensky’ to remove the funds from my account including the money that I requested for withdrawal which I had no access to. Despite the fact that I emailed them from my email account they accused me of being an infiltrator. The last email response I received from Solidity Support, they told me that the BTC had been removed from the the czensky account to an ‘unknown users’ account.

Solidity have lied and said that they do not store information about internal transfers of crypto. I have since received an email from a random person who has sent me a screenshot to show that they have my BTC and they are now blackmailing me to put 4 BTC in a wallet on the crypto platform coinbase and then they will return my BTC. They gave me 14 days from 12 July 2022 to deposit the BTC in the wallet otherwise they will scatter my BTC  around random Solidity wallets so it can’t be traced. I have sent a number of emails to Solidity and they are now ignoring me but this is serious as I am a victim of a criminal offence.

Solidity have given me their IRS employee ID and I suspect that all of this is a ploy to try and get money from me and for them to make a profit which they will not declare to their tax authorities.

It is too coincidental that the person who has taken my BTC has a wallet on Solidity and they cannot find it. It also means that Solidity are not regulating their service users in accordance with law as they have stated.

This is time critical and a large amount of money so please contact me as soon as possible. I have all emails and communication threads to support everything that I have said.”

Go to the main page about crypto scams